Magnan Metz Gallery is pleased to present Amelia Biewald’s fourth solo exhibition with the gallery. Werther Effects will be on display from December 6th through January 12th with an artist reception on Thursday, December 13th from 6-8pm.

Amelia Biewald’s most recent works investigate the brilliant visual possibilities of Elizabethan England; an era that produced incredibly intricate and sophisticated clothing but lacked comfort and convenience. Biewald pays great attention to the neck ruff, an iconic embellishment often seen in Elizabethan fashion. Despite being entirely uncomfortable and cumbersome, almost impossible to construct (this was left to specialists who only made and starched ruffs), and boasting extremes of width which made even the most simple tasks quite daunting, the ruff maintained its popularity for over a century. Biewald considers the ruff’s lacey details both beautiful and compelling. She has incorporated its form into various works in Werther Effects including two exhibited at the front of the gallery space: The Sorrows of Young Werther,  a small mixed media installation, and Pretty Girls Make Graves, a large panel of plastic, acrylic and resin.

Biewald’s primary source of inspiration was born from The Sorrows of Young Werther, a semi-autobiographical novel by Joann Wolfgang von Goethe, first published in 1774. It became one of the most widely distributed publications of its time, gaining popularity amongst young men who began to dress similarly to the book’s main character. Along with displaying copycat fashion, young readers also started to exhibit the typical melancholy behavior of the novel’s subject.

In Werther Effects, the artist manipulates both traditional and invented artist materials and techniques, creating luxurious surfaces that generate a voyeristic costume drama. Biewald’s mixed media panels and sculptures shine a new light on the imaginative history of the Elizabethan age and its peculiar trends in fashion.

For more information or images, please contact the gallery at info@magnanmetz.com or 212-244-2344 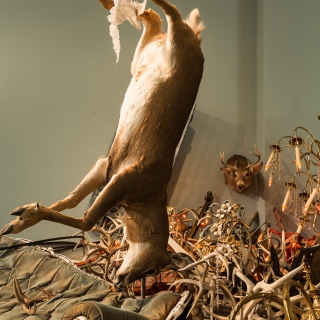