Magnan Projects is pleased to present the first solo New York show for Ariana Page Russell.   Axial Bloom confronts how skin/body occupies domestic, as well as other, spaces and how these spaces imprint and influence ones body.

For Russell, skin is the axis of life’s transitions and emotions.  Dermatographia, a condition in which one’s immune system exhibits hypersensitivity through the skin causing welts to appear when lightly scratched is of particular interest to the artist.   Russell’s own skin is affected by this condition which she has transformed into a unique method of creating a body of artwork.

Axial Bloom will convert the gallery space into a vision of sample wallpaper patterns and photographs.  Influenced and inspired by her father’s work as a wall paper hanger, Russell adorns her body (painlessly) in patterns adapted from wall paper designs ranging from Greek and Etruscan vases, Medieval diapers, and Renaissance pottery designs to contemporary wallpaper found in domestic spaces.  She then photographs the imprints and cuts them into pieces that are attached to the wall or board.  Russell explains,” Although the basic elements of the designs remain constant, the configuration and placement of decoration is continually shifting within varying spaces just as skin reveals the passage of time with its transitions.  I am investigating where one surface ends and another begins, the bloom of adornment, and how exteriors reveal as they conceal.”

In addition to a 22 foot long wall installation, photographs and patterned panels will be on exhibit.  Axis 1 (C-print, 40 x 50 inches) consists of a detailed photograph of the artists stomach area covered in blemishes and imprinted patterns. This photo is mounted onto a panel that is covered with cut-outs of various photos of Russell’s skin creating meandering patterns and varying hues of skin coloration from deep crimson to light nude shades.

A performance aspect will also be incorporated into the opening on Thursday, December 14th.   Visitors will be invited to draw on the artist’s body (neck, chest and arms) which will be video-taped for documentation. 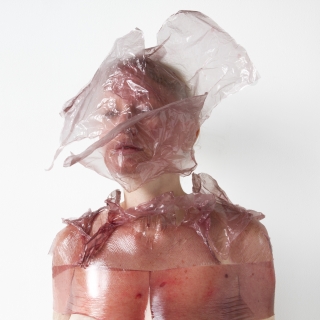