Magnan Metz Gallery is pleased to present its second exhibition by David Opdyke.
Truthful Hyperbole will be on view from September 9 - October 22, 2016 with an artist reception on September 8, 6-8 pm.
David Opdyke's new body of work refracts the promised glow of American democracy - once embodied in shiny optimism and irrefutable power. Coined by Tony Schwartz to describe the creative liberty taken to bolster Trump's success in his biography, The Art of the Deal, Opdyke now uses the phrase to shed dystopian light on our political landscape.
Amongst the work in Truthful Hyperbole is a project of big ideas and tiny detail, adopting the sentimental aesthetics of iconic American imagery. Depicted in the artist's archive of hand-modified vintage postcards, Opdyke alters these images of an age unfettered by the crises of our current globalized, environment-threatening, energy-hungry, stratified world.  By precisely maintaining both the aesthetic and emotive qualities of the images in his amendments to the images-a pipeline breaking through the Senate chamber, an angel brandishing automatic weapons in a fresco from the Library of Congress-he re-imagines the postcards' original messages.  The result is a double-take, whipping off vintage rose-colored glasses to see a deeply-flawed future-and present.
A range of artwork will be on view inspired by the random bounty of images in the postcards. Five Follies, a suite of short animations derived from the postcards dig hard into the oppressive spectacle of the Presidential campaign. Another, Ain't No Revolution, sets up a melodramatic showdown between cartoon avatars of the Occupy movement and Wall Street. A large sculpture, Nadir, depicts a sprawling technological-industrial ruin in miniature, tattooed with a riotous cacophony of micro-scaled protest graffiti. God Isn't Fixing This, a giant flag shows a literal entanglement between religion and guns.
The utilitarian purpose of the postcard as a messenger of American pride and marker of time and place - last week I was here, how about you? - is diverted to a poetic purpose, pulling larger issues from the individual moments and letting some air out of the inflated images. Opdyke's results in Truthful Hyperbole are opinionated, critical and empathetic.
Born (1969), in Schenectady, NY David Opdyke graduated from the University of Cincinnati with a degree in painting and sculpture.  He has created large scale installations at the Museum of Arts and Design in New York, the North Dakota Museum of Art, the Addison Gallery of American Art, Andover MA, the Corcoran Gallery of Art, Washington D.C. and a Brooklyn Public School commissioned by Percent For Art. He was awarded the Aldrich Emerging Artist Award Exhibition, The Aldrich Contemporary Art Museum, Connecticut (2004), and American Paradigms, Corcoran Gallery of Art, Washington D.C. (2004). He has also participated in exhibitions at the Brooklyn Museum, P.S.1, Palm Beach Institute of Contemporary Art, and in venues in Chicago, Zagreb, Lille, and Milan. Opdyke's work is in many permanent collections including the Museum of Modern Art, Deutsche Bank, the Brooklyn Museum of Art, Cleveland Clinic, Progressive Insurance, and the Washington, D.C. Convention Center Authority. The artists lives and works in New York City. 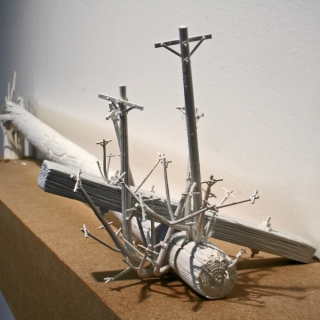