Magnan Projects and Magnan Emrich Contemporary are please to present Duke Riley’s second solo show at the New York gallery.  After the Battle of Brooklyn: East River Incognita II further examines the artist’s fascination with and exploration of maritime history and events around the waterways of New York City.  The exhibition will be on view from November 1 – December 22, 2007.

Riley’s signature style interweaves historical and contemporary events with elements of fiction and myth to create allegorical histories.  His re-imagined narratives comment on a range of issues from the cultural impact of overdevelopment and gentrification of waterfront communities to contradictions within political ideologies as well as commerce and the role of the artist in society and at war.

Each exhibition, or project, is presented as a museum-like setting.  Artifacts of questionable provenance and mock documentaries are presented alongside drawings and mosaics. This exhibition, After the Battle of Brooklyn, revolves around historical obscurities that took place in New York during the American Revolutionary War.  In addition to drawings, mosaics and videos, Riley constructed a replica of the first primitive Revolutionary War submarine (“The Turtle") that is propelled by a hand crank and submersible for up to 20 minutes.  In 1776 George Washington’s Continental Army used these subs to target the British flagship The Eagle.  Putting a contemporary spin on this idea, Riley launched his submarine (“The Acorn”) while the Queen Mary 2 was docked in the Brooklyn Harbor and captured the attention of the Coast Guard, NYPD and major newspapers.

Riley’s main character in the show is the rogue commander of a second, unpublicized, submarine (The Acorn) who went missing in action under debatable circumstances.  Two seminal works in the show are made of composite tiles and acrylic on wood panel.  Bringing 370 New Jobs to Redhook is a 15 foot long black and white mosaic of the Queen Mary 2 with iridescent windows.  The inclusion of the QM2 throughout Riley’s artwork serves as a representation of the artist’s modern day spin on British occupation, as well as a social commentary on the failed attempt of the newly constructed Brooklyn Cruise Terminal to bring employment and commerce to the area.  Libertas aut Mori (96 x 96 inches) depicts the commander inside The Acorn submarine and acts as documentation of the journey and historical significance of The Acorn.

Duke Riley was born in Boston, Massachusetts and received his BFA from Rhode Island School of Design and his MFA from Pratt Institute.  After his first solo show with Magnan Projects in 2005, Riley has been exhibiting his work at venues such as Palais de Tokyo, Paris; PS 1 Center for Contemporary Art, New York; Belfast, Ireland and DUMBO Arts Center, Brooklyn.  Solo shows include Sarah Lawrence College and White Box.  Riley recently completed a residency at Fremantle Arts Center in Western Australia and currently has a residency at the Chashama Studio’s in New York.

A full color hard-bound book will be available with essay by Eleanor Heartney. 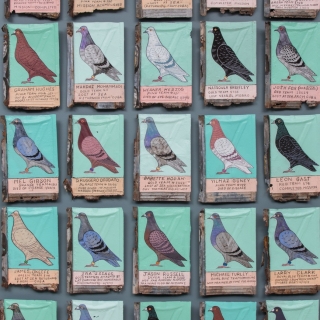