Magnan Projects is pleased to present New York based mixed ritual, spoken word artist Larry Litt.  This will be Litt’s second performance at the gallery and first exhibition.  Hate Book – Holly Fires is an examination and justification for Ritual Burning of the Protocols of the Elders of Zion through ritual objects, video, photography, collage and installation.

Larry Litt’s collaborative exhibition displays the infamous history and current life of the notorious, fraudulent forgery, Protocols of the Elders of Zion. This book, which claims the existence of an ancient, secret Jewish conspiracy that rules the world, is still translated, published and distributed worldwide.  Litt incorporates examples of these books in his Kabbalist inspired talisman and magic squares empowered to overcome anti-Semitic plots and expel evil spirits from the plotters.

Talismans are based on magical keys from a book containing Kabbalistic formulae reputed to have been written by biblical King Solomon.  Cremation urns hold the ashes of books burned in virtual performances with photo montage documentation.  “They are my dreams of purifying and bringing tolerance to places where ancient hatreds still seethe,” Litt explains.

Using chants, percussion and shamanic poetry, Litt’s Hate Book – Holy Fires performance dramatically recreates the sacrificial experience of book burnings throughout history; only this time it is Hate Books that burn.  The audience will be invited to symbolically burn the Protocols with Litt during the Hate Books – Holy Fires performance ritual.  Of his performance Litt states, “Symbolically burning Protocols of the Elders of Zion, is a step towards condemning the horrendous damage this book has done, and is still doing, since it’s first publication in early 20th century Czarist Russia.  I don’t agree with book burning at all, however burning the Protocols is my way of attacking the lies that perpetuated the World War II Holocaust. Today its publication continues in many new translations doing incredible damage to humanity.  Will it ever end?”

Litt performed Hate Books—Holy Fires at the 2nd Moscow Biennale in March 2007, and in May he symbolically burned a Protocols at New York’s famous Joe’s Pub to a cheering audience.   Litt’s first performance at Magnan Projects in September 2006, Peace and Pleasure Talisman Ritual, symbolically burned the books of Fox News CEO Rupert Murdoch and his ultra conservative pundits. Within days the cable news station was plagued by chaos, confusion and ratings losses. 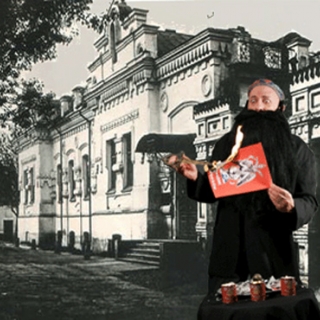