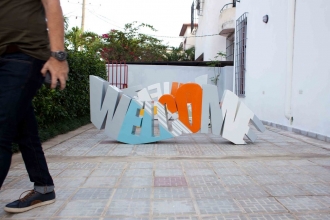 HAVANA — Kadir López was working in his studio at his elegant home here when the doorbell rang. It was Will Smith and his wife, Jada Pinkett Smith.

“I had no idea they were coming,” said Mr. López, whose work incorporates salvaged American signs and ads that were torn down after Fidel Castro’s 1959 revolution.

About an hour and $45,000 later, Mr. Smith had bought “Coca Cola-Galiano,” an 8-by-4-foot Coca-Cola sign on which Mr. López had superimposed a 1950s photograph of what was once one of the most bustling commercial streets in Havana.

“Where else in the world does Will Smith turn up on an artist’s doorstep?” he said.

As collectors, art connoisseurs and institutions eagerly gear up to travel to Cuba after President Obama’s decision to loosen the economic embargo, the art scene that awaits them is sui generis: a world whose artists are cut off from supplies and the Internet and, at the same time, celebrated by a coterie of international buyers whose curiosity and determination brought them to Cuba long before talk of a thaw.

Cuban artists — from the most established to those still studying at the Higher Institute of Art — receive visits from institutions like the Bronx Museum of the Arts and the Museum of Modern Art and from visitors. Many of the visitors are wealthy intellectuals who travel to Cuba on “people-to-people” trips that are permitted under the embargo.

“The phenomenon is very unusual,” said Carlos Garaicoa, an artist who works with photography and sculpture and splits his time between Havana and Madrid.

He added, “I doubt it happens anywhere else.”

That pipeline of art lovers is about to grow, predicts Alberto Magnan, whose Chelsea gallery Magnan Metz specializes in Cuban art. Mr. Magnan, who is currently in Havana, received 25 calls from collectors on Dec. 17, after President Obama announced that the two countries would move to restore diplomatic ties. He is now booked through March with Cuba visits.

Even though Americans can visit Cuba under rules dating to 2009 that allow “purposeful travel” intended to foment contact with Cubans, many shied away, Mr. Magnan said.

“It’s a hassle,” he said, referring to the need to get a license from the American government and pay for works without using an American credit card.

Now, however, “they’re saying, ‘I want to go before everyone else does,’ ” he added.

Steve Wilson, a Louisville, Ky.-based collector with Mr. Magnan in Havana, snapped up eight pieces, mainly by young artists, with price tags between $1,500 and $15,000 on Sunday night at the Fábrica de Arte Cubano, an art space in a converted factory.

Mr. Wilson, a founder of 21c Museum Hotels, which house contemporary artworks, said he hoped the diplomatic opening would allow him to organize residencies for Cuban artists in the United States and vice versa — maybe even open a 21c in Havana.

“I love the fact that more people will be able to come and see this work,” he said.

Since the 1990s, the Cuban government has given extra freedom to artists, who are viewed as a pillar of the country’s cultural prestige, allowing them to travel and keep a large share of their income.

Some worry that artists will begin to produce like mad in anticipation of a boom.

“If 500 collectors turn up all of a sudden, quality will go down,” said Roberto Diago, 43, whose artworks explore the issue of slavery and race in Cuba and sell for between $2,000 and $30,000. Mr. Diago said he had “lost count” of the number of studio visits to his 1920s mansion in a sleepy Havana suburb.

Still, a lot of artists are barely known, especially outside Havana, said Sandra Levinson, a founder of the Center for Cuban Studies in New York. Other than Magnan Metz, she said, only a handful of galleries in Miami and one or two on the West Coast are focused on Cuban art.

“I think there’s still a lot to be discovered,” said Ms. Levinson, who successfully spearheaded a lawsuit against the Treasury Department in 1991 to allow Americans to bring art home from Cuba. Ms. Levinson was in Cuba when the news of the détente broke and members of her party were “buying and buying and buying,” she said.

Jonathan S. Blue, a Louisville financier who caught the Cuban art bug from Mr. Wilson and has a dozen Cuban pieces whose prices ranged from $2,500 to $300,000, said he would waste no time when he returned to Cuba for the fifth time next week.

“I think the time between seeing a piece I like and the decision to purchase will be decreased,” he said, laughing.

Mr. Blue, whose Cuban works include a vinyl record made of tightly coiled eight-track cassette tape by Glenda León, an artist based in Havana and Madrid, and two sculptures by Alexandre Arrechea, including “Sherry Netherland,” a looped, scarlet steel sculpture of the opulent Fifth Avenue apartment hotel, said that part of the charm was getting to know Cuban artists and navigating hurdles.

“If you walk into a gallery in Mexico City and say, ‘I want that in my apartment on Monday,’ it’ll be there,” he said. “It doesn’t work like that in Cuba.” He added, “The challenge makes it that much more interesting.”

But for Luis Miret, director of Galería Habana, the most prestigious of about a dozen state-owned galleries in Havana, those hurdles are a drag. Currently, anything shipped from Havana to the United States — only 90 miles away — has to go through a third country, such as Panama or Britain. Mr. Miret calculates that air cargo fees from Havana to Miami would be about 70 cents a kilo (roughly 2.2 pounds); he pays about $6.70 a kilo to send things via London.

Mr. Miret recently lost a three-year battle to recoup $17,000 that Galería Habana wired to an account in Miami to pay for a booth at a Colombian art fair. The funds were confiscated by the Treasury Department.

“How can it be that I am allowed to publish an ad in Art Forum, but I can’t pay to participate in an art fair?” he said in his small office at the gallery. “I don’t get it.”

All three received a free nine-year art education, he said, but, now that they are working, there is very little in the way of grants from the government or from foundations.

Indeed, they are an example of the odd contradictions facing artists: The three, whose works sell for between $500 and $8,000, are represented by a Belgian gallery Verbeeck-Van Dyck, and each has a solo show there next year. Their studio is in a spacious house in an upscale neighborhood — they got a deal from a divorcing couple; they wouldn’t say how much they paid. But they have to bring everything they need, from track lighting to graphite to canvasses, from abroad. And, as he sat in an Ikea armchair on a recent rainy morning, Mr. Fernández confessed, “We are all still living with our parents.”

Several artists said that a market where they would sell a majority of their work through galleries would benefit them. Often wealthy visitors — as opposed to collectors — bought works that the artist then lost track of, they said, which would make putting together a retrospective difficult. Prices, they said, would become more transparent and more stable.

Another thing that will change if the number of collectors rises, Ms. Levinson said, is that artists will become less accessible.

“Most artists don’t like to sell their own work,” she said. “Cubans are more open to it than most people, but they’ll feel they have to have an agent.”

She added: “They can’t spend all their time meeting foreigners who bob into their studios. They have to be able to find time to work.”

If that ever happens, Mr. Garaicoa said, it will be a sign of maturity.

“Sometimes there are visits where, if I am not here, they don’t want to come,” he said. “I would hope that the approach to Cuban artists becomes about the art itself.”