Magnan Metz Gallery is pleased to present Ivan Puig’s New York solo debut. Not A Car will be on display from January 24th through March 9th with an artist reception on Wednesday, January 23rd from 6-8pm.

In 2010, Ivan Puig embarked on an exploratory journey across his native Mexico in the SEFT-1 probe – an artist-designed, custom-built vehicle (it’s skeleton an old Ford F-150), equipped to move on both land and rail. The SEFT, an acronym for Sonda de Exploración Ferroviaria Tripulada or Manned Railway Exploration Probe, is a trans-disciplinary project by Puig and his brother, Andrés Padilla Domene. The two set off from the National Museum of Art in Mexico City to begin their investigation of abandoned railways throughout Mexico and Ecuador, collecting evidence of their travels through photo, video and audio. Puig and Padilla Domene recorded contemporary landscapes, infrastructure and details of the everyday life of inhabitants to create a futuristic exploration of the countries’ pasts. Their progress has been consistently updated on the project’s website, www.seft1.com, where the public can follow the trajectory of the vehicle, view images of artifacts collected and listen to interviews with those they have met along the way.

Dominating the main gallery space is the SEFT-1 probe itself, accompanied by vivid photos documenting the stunning, almost otherworldly, scenery surveyed by Puig and Padilla Domene. Prior to its inclusion into the gallery, the vehicle made a monumental trip from the US/Mexico border to the city of Albuquerque, New Mexico where it was exhibited at the Albuquerque Museum of Art and History. Following this New York debut, Puig will bring the SEFT-1 project to London where he will explore the world’s very first public railway system.

Puig has described his interest in the sensory experience of reality as an aesthetic event. He seeks to create relationships and stories with people across both rural and urban regions, hoping to create a greater understanding of social conformity. “The [SEFT-1] project,” says the artist, “creates scenes in which progress has left a clear mark and compares it to its current status in the hopes that the discrepancy will cause people to question it.” Originated on the platform of art, this project also intersects with topics of technology, history, anthropology, politics, human geography, education, and environmental science.

Beyond the SEFT-1 installation, in the rear of the gallery, Puig displays Hasta las Narices (Fed Up). Created in 2004 at the Haus Der Kunst Gallery in Guadalajara, the fictional white Volkswagen Beetle appears to be almost entirely engulfed by milk-white quicksand. The metaphorical illusion refers to the collective frustration of Mexico four years after Vicente Fox had been elected as president. With just water, pigment, glass and PVC, Puig creates a striking and amusing piece of political commentary.

Ivan Puig (b. 1977, Guadalajara, MX) has exhibited internationally in Mexico, Germany, Canada, Brazil and the United States. He is the recipient of a number of awards and residencies including the BBVA Bancomer Foundation Grant for the SEFT-1 project (2010-2011) and the Cisneros Fontanals Foundation (CIFO) Grant in 2010. Puig, a member of the collective TRiodO (with Marcela Armas and Gilberto Esparza), lives and works in Mexico City.

For more information or images, please contact the gallery at info@magnanmetz.com or 212 244 2344. 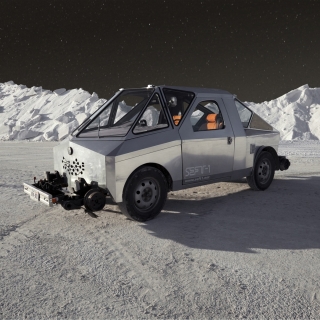