Magnan Metz Gallery is pleased to present the third solo exhibition for Susanna Heller. Phantom Pain will be on display from March 15th through April 20th with an artist reception on Thursday, March 14th from 6 to 8pm.

Also known as absence seizure, phantom pain is a medical term, which describes the actual sensation of pain in a missing limb. It has been referred to as nerve memory; the pain being present and real, but the source not visible. Heller’s husband, Bill, who lost his left leg in 2010 due to a rare infection, suffers from this condition. Heller believes that she, along with all of society, is living in a time of phantom pain. Just as her husband’s nerve endings retain a sharp sensation, Heller believes she is now painting with the “nerve endings at the tips of my brushes.” The artist views painting as a way of investigating and of traveling the territory of powerful and momentous physical and emotional stories that, though hidden from plain view, are all around us, as well as inside us.

In Rolling Thunder, the 4-panel work on canvas, Heller has created a cityscape, drenched in the distinctive, almost mystical light of an oncoming storm. New York, as seen from Brooklyn, has become a biological entity, being invaded by a foreign intruder. Similarly, in works like Skull-Scape and It’s Thundering, the city is a body under attack; the harbors, skylines and other landmarks of New York recombined into visages leering in mid-decay.

Just past the front of the gallery, Heller reveals a more intimate and literal window into her husband’s harrowing year of sickness and recovery. Phantom Pain depicts Bill sitting in his wheelchair, left leg gone, but as the title suggests, still felt. Fellow painter and colleague of Heller, Julian Kreimer, thoroughly illustrates the scene: “A white line punctuated irregularly by red dots surrounds him, setting off the light greys and blues that fill the background. It’s reminiscent of a blood-stained PVC tube and of a looping subway line with the stops marked in red.” Tucked away on the west wall is a collection of sketches that Heller drafted steadily through endless hospital visits. The drawings of the East River from the window of the NYU ICU bring a sense of tranquility back to the distressing situation at hand.

Susanna Heller was born in 1956 in New York, NY. She grew up in Montreal, Canada, and received a BFA from Nova Scotia College of Art and Design in 1977. She moved back to New York City in 1978, and has lived in Greenpoint, Brooklyn since 1981. Her work is represented in Toronto, Canada by Olga Korper Gallery and in New York by Magnan Metz Gallery. She has received numerous awards including several Canada Council Grants, a Guggenheim Fellowship, an NEA in painting, and a Joan Mitchell Foundation award.

For more information or images, please contact the gallery at info@magnanmetz.com or 212 244 2344. 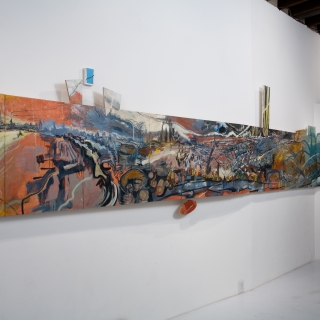