Magnan Metz Gallery is pleased to present the second exhibition for Susan Gamble and Michael Wenyon:  A Universe held up for Inspection.  The show will feature holograms made at an historic observatory, as well as digital prints taken in India and Cuba during the past four years.

Wenyon & Gamble, the collaborative team who have worked together since Anchor1983, first became known for exploring holography – a medium considered new in the 1980s, but one that now seems to belong to an older, optical era of image making.  In A Universe held up for Inspection, the artists place a world constructed by science under a cultural examination of their own, where the ironies of what is progress and what is obsolete are conjured for scrutiny.

In Album (1994), a series of nineteenth-century wooden boxes appear to float within a wall.  The boxes are illusory: holograms of the stored photographic plates of Charles Piazzi-Smyth, a nineteenth-century astronomer and close friend of William Fox-Talbot, inventor of the Talbotype. Like the antique negatives contained in the boxes, the holograms, too, are recorded on glass photographic plates. The earliest lens-based photographic process is depicted using that of the twentieth-century hologram, perhaps the last gasp of a purely analogue medium. The wooden boxes are labeled with subjects considered suitable for scientific observation in the mid-nineteenth-century: clouds, elephants, and pyramids

Since becoming the first artists in residence at the Royal Greenwich Observatory, England, in 1987, Wenyon & Gamble have sought to photograph sites of science in different contexts and cultures. This exhibition includes imagery from India and Cuba. The Planetarium Havana, Cuba, is a space-age structure under construction in an old cinema in a market square of Havana – now part of a UNESCO World Heritage site. The bright steel structure contrasts with the rough simplicity of the site and its equipment. The image reveals the social aspirations––for modernity, knowledge and leisure––that will be obtained, in the future, through the spectacle of contemporary astronomy.

Susan Gamble & Michael Wenyon combine different academic backgrounds in art and science: Gamble has a BA in Fine Art from Goldsmiths' College, London and a PhD in the History of Science from Cambridge University. Wenyon has a BSc in physics from Bristol University, UK, and an MSc in optics, from Imperial College London; on graduating, he wrote one of the first popular textbooks on holography.  Their works are in prominent collections such as The Victoria & Albert Museum, London; the M.I.T. Collection, Boston; the National Portrait Gallery, Washington DC and the National Academies of Science, Washington DC and have been exhibited at the Whitney Museum of American Art and Tate Liverpool, UK.  In 1995 they were awarded the UNESCO Prize for Prize for the Promotion of The Arts for their contributions to new technology art. The artists live in New York and London.

For visuals and additional information, please contact the gallery at 212-244-2344/info@magnanmetz.com 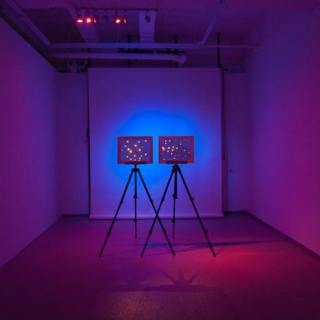